From 1954 through 1973 approximately 2,300 special service men were trained as medics at Fort Sam Houston’s 91 Bravo School. These young Americans were conscientious objectors because of their religious beliefs. However, their strong patriotic convictions made service to their country a high priority in their lives. As a result, this group volunteered as personal participants and placed their lives and well-being in an even scarier “harm’s way” in America’s little-known Cold War battle to protect our fighting troops from the very real threat of germ warfare. The project became known as Operation Whitecoat.

These soldiers, mostly of the Seventh-day Adventist faith, participated in experiments (most of which took place at Fort Dietrick, Maryland) where they were exposed to various levels of infectious agents and diseases. By using these individuals as “human guinea pigs” military medical personnel were able to demonstrate the feasibility of preparing a defense against biological warfare agents and known risk factors that existed not just in the battlefield, but also in the workplace. These experiments resulted in the development of vaccines to protect the american troops at risk of exposure to biological agents and infectious diseases on the battlefields of Korea, Vietnam, Desert Shield and Desert Storm.

Many of those experiments expanded the world’s knowledge of infectious diseases and society as a whole benefitted greatly from the medical research of Operation Whitecoat in poison control and antibiotic treatments. A vaccine against the virus known as Rift Valley Fever was tested for safety and immunogenicity on the Whitecoat Volunteers. This was the only vaccine for the virus to be tested on humans.

– First real tests of human vulnerability and protection involved Whitecoat volunteers.
– Effective systems for biological hazard containment were developed and tested with participation of Whitecoat Volunteers.
– In 1968 and 1969, many Whitecoat Volunteers participated in the development of Rift Valley Fever Virus vaccine, NDBR 103 RVFV, was used routinely to immunize at risk workers in reasearch laboratories at USAMRIID, CDC and Plum Island Animal Disease Laboratory.
– In 1977 a major outbreak of Rift Valley fever in Egypt involved up to 200,000 humans and virtually all the sheep. It caused 2,000 human deaths and enormous loss of sheep.
– Egypt and Israel found out that our RVF vaccine was the only one that had been tested for safety in humans under an IND from the FDA.
-This was the same Vaccine that had been tested in Operation Whitecoat volunteers in 1968. 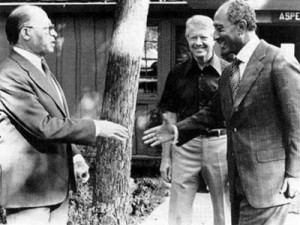 RVF Vaccine Caused Peace To Break Out In The Middle East.

– A little known benefit that Operation Whitecoat volunteers provided was to enable peace between Egypt and Israel to “break out” because of obtaining RVF Vaccine was an important bargaining chip to both parties.
– Emissaries from Egypt and Israel reqeusted RVFV as Sadat and Begin met at Camp David with President Jimmy Carter.

Still Standing today at For Detrick, Maryland is a 40-foot-high, gas tight metal globe known as the “8 Ball.” Military medical personnel, in conducting biological warfare test (including the test on Whitecoat participants), used this historical biological warfare structure as the “home and dispensing mechanism” for the biological agents and exposure to these agents took place when soldiers bread from its ports. This one million liter test sphere remains as a symbol of tests on humans of biological weapons. It is now listed on the NATIONAL REGISTER OF HISTORIC PLACES and serves as a “visual reminder of the past, a time when certain military labs were guarded by submachine gun towers and scientists had pistols handy on their workbenches.” (Norm Covert, Fort Detrick Historian)